The Red Sea is a real gift from Mother Nature. I had the opportunity to discover for the first time this enclave between the African continent and the Middle East in 2011, a few months after the Arab Spring. Tourists then deserted Egypt’s dive sites and resorts such as Hurghada. Diving on these world famous sites was a revelation and every return to Egypt is for me an immense pleasure. With legendary clarity and color of water, incredible wildlife, including a wide variety of fish species, and always pleasant temperatures, the Red Sea is a delight for divers. Here are the most beautiful dive sites in the Red Sea in Egyptian waters !

“Ras Mo” as it is often called is certainly one of the most beautiful dive sites on the planet! At the extreme south of the Sinai Peninsula, two huge pinnacles, Yolanda and Shark Reef, overhang a falling down to nearly 800m deep. This is where you often see the passage of pelagic like big jacks or tuna. Batfish gather regularly to form beautiful schools. North of the two coral formations, a huge coral garden awaits divers who will feel like an open-air aquarium. Since 1983, the site is classified and protected as a National Park. Underwater life is simply incredible, and underwater photographers will not know where to turn! The wreck of Yolanda that is found to the west of the garden is also emblematic of the site. You will be surprised to discover a whole cargo of sanitary, where many divers come for some photos … 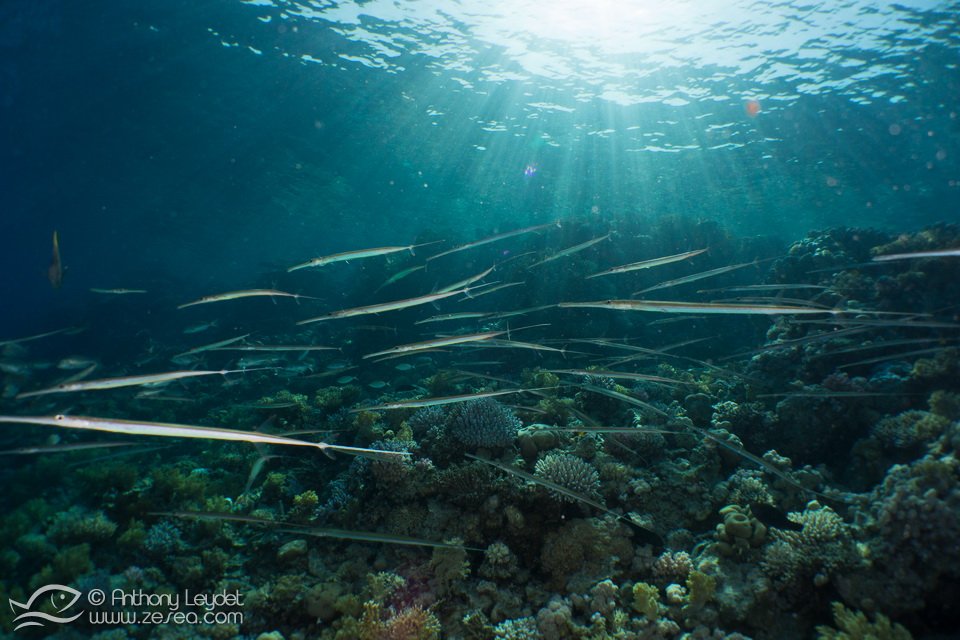 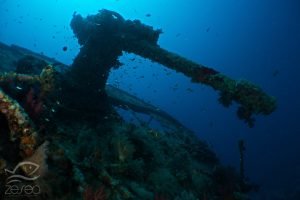 Here is one of the most famous wrecks on the planet! And it is accessible even for good Open Water divers because the highest part is about 18m. The SS Thistlegorm is a British freighter that was sunk on October 6, 1941, hit by two German bombers, while it was positioned at anchor, not far from Ras Mohamed. Carrying military equipment, he sank with his cargo, and rests on a sandy bottom at 33m.

It is common practice to do two dives to take full advantage of the wreck. One is outside, and allows to observe the huge propeller, the famous gun, the locomotives that were expelled a few meters from the wreckage, the entire upper part of the building, and of course the bow in s a little away if the current allows it. A second dive will take you inside the Thistlegorm. There are armored vehicles, vans and even BSA and Norton motorcycles. A multitude of fish has seized the place, like the many hatchet fish that walk in benches between vehicles … 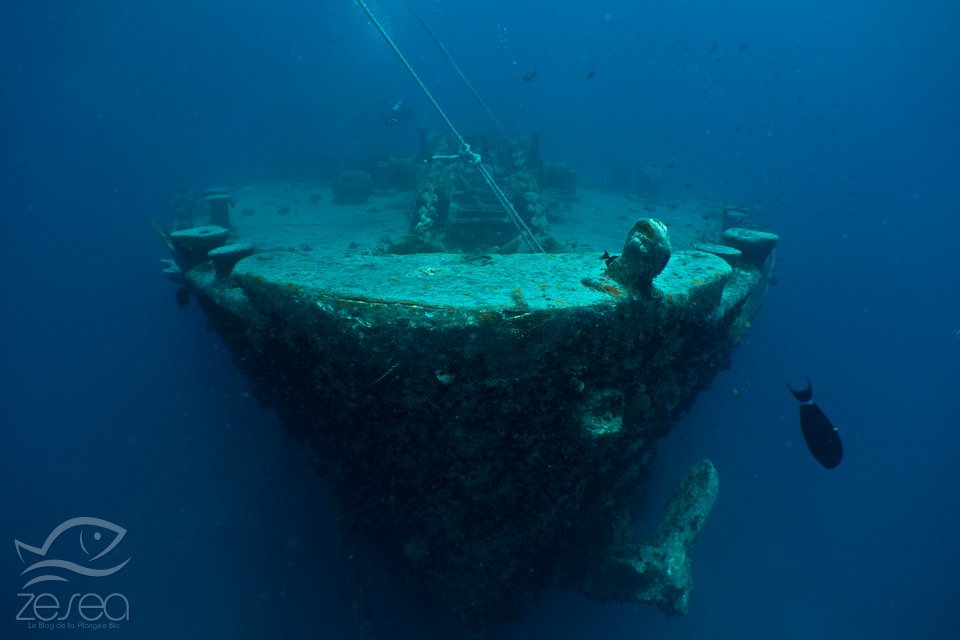 Sha’ab Abu Nuhas is a spot not to be missed when diving in the Red Sea. This small reef, located on the shipping route at the exit of the Gulf of Suez, was the scene of several shipwrecks and offers four beautiful wrecks easily accessible. The most famous are the Ghiannis D and Carnatic, not far from the Kimon M or Chrisoula K. The Ghiannis D has the distinction of being placed at 45 ° on the bottom, and when you get inside it is possible to feel dizzy and be destabilized by seeing the surface outside. The Carnatic is superb with the remains of the cargo structure covered with alcyonaires … Other wrecks are also based around Abu Nuhas, but being deeper, they are less accessible for recreational divers.

The Strait of Tiran is one of the most special places in the Red Sea ! Wedged between Sinai and the Arabian Peninsula, in the extreme south of the Gulf of Aqaba, several coral reefs extend in the middle of the strait. On the one hand, Egypt, on the other hand, the island of Tiran, in the strategic position which won for it to be courted by the countries of the region, which was finally ceded by Egypt to the Saudi Arabia very recently, in June 2017.

There are four reefs in Tiran, at least those frequented by divers. Thomas Reef is one of the best known, it is the smallest but generally the richest. There is a canyon in which the Deep Diver can rush to pass under the three arches that surmount it. The wall of the wall is simply superb with an abundance of incredible life. Jackson Reef is the northernmost reef. It is often subject to strong current, and it is not uncommon to cross many pelagic and especially sharks. Woodhouse Reef is all in length, and it is possible to do a nice drift dive. Finally Gordon Reef is known to house a garden of garden eels, but also sharks that take advantage of the current.

In general, dives on these sites are subject to currents, because of the situation of these reefs. It is therefore necessary to master his balance and buoyancy, and especially to remain calm. Drift dives will allow you to fly over the coral reefs without any effort !

Let’s go a little further south of Hurghada. In front of the seaside resort of Safaga, three reefs surface to the surface, and offer dives among the most famous of Red Sea. From north to south, Panorama reef, Middle reef and Abu Kefan are an exceptional playground where divers will discover tumbling drops of life. It is not uncommon to see some beautiful hawksbill turtles feeding on soft corals.

Abu Kefan is a long reef whose drop-offs sink deep down. Both ends have a plateau surmounted by pinnacles where it is possible to discover the best of the Red Sea. Panorama Reef is just as beautiful, it is also one of the best known sites. There is a plateau in both the North and the South and it is possible to observe many pelagics in the blue. One of the peculiarities is the presence of a “village” of anemones, called Anemone city, where many clown fish have found refuge ! 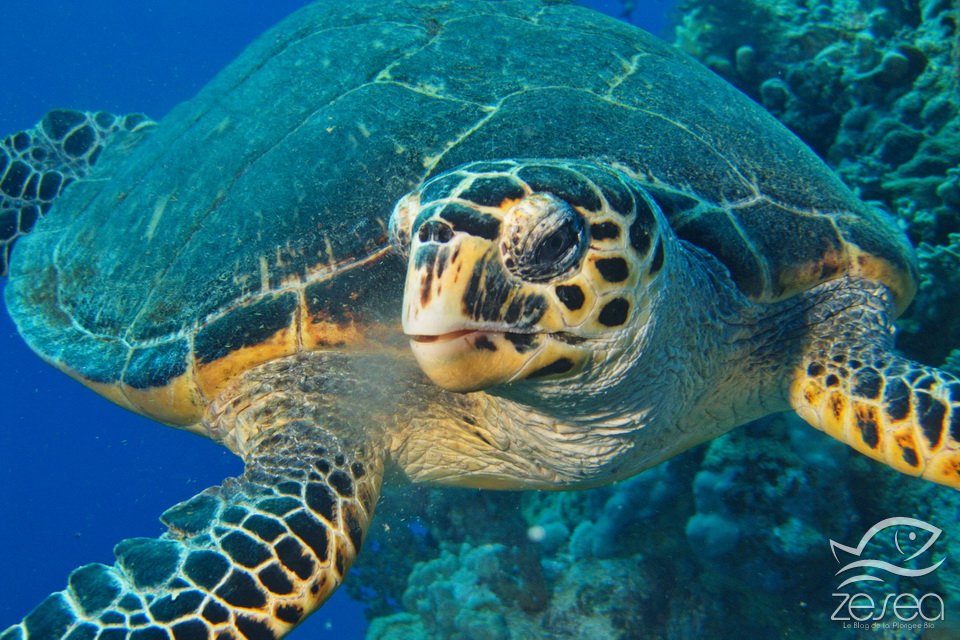 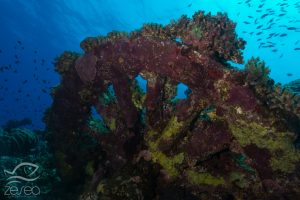 The Brothers Islands (Small Brother & Big Brother) are a must for diving in the Red Sea when one loves the big drop-offs covered with gorgonians and corals, where regularly come the big pelagics. The two islands, located far off El Quseir, are rather reserved for good divers, because often windy. This results in a relatively perilous launch when the waves fall near the reef, and currents generally present. Nothing insurmountable, but it remains important to know how to balance.

There are always beautiful people to see under the water Brothers. Starting with sharks, like foxes, gray or hammers. It happens sometimes to cross with a little luck, a whale shark ! For my part, I remember the place like the one where I crossed a tiger shark, a few seconds after launching north of Big Brother, before exploring the Numidia.

Because it is also the big interest of the Brothers, the Numidia, a magnificent wreck placed almost vertically along the wall. This English freighter, which carried railway material, is accessible from 15m to 90m deep. Very colonized, we find a multitude of fish circulating between the metal structures of the wreck. 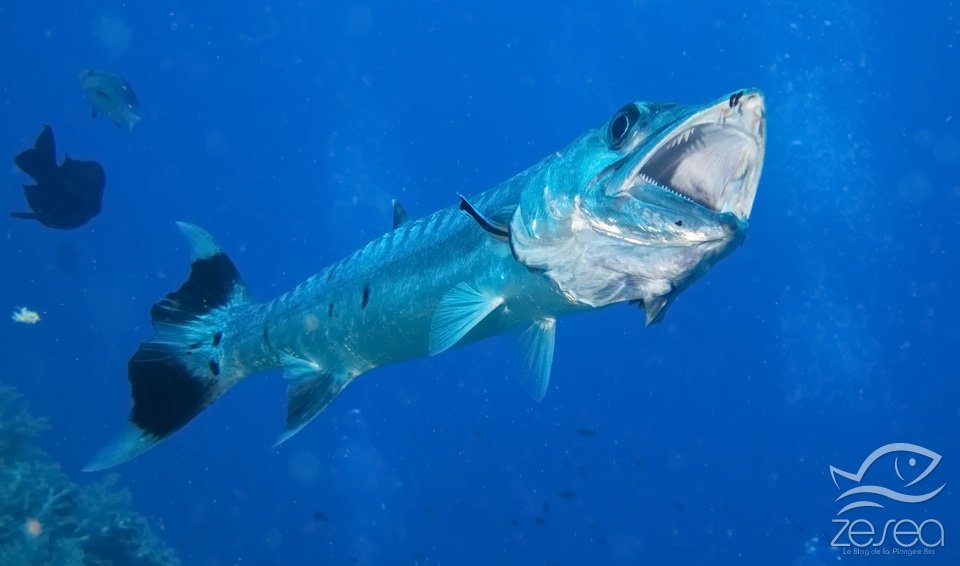 It is without a doubt one of the most mythical dive sites in Egypt. The navigation is a bit long but well worth it. Daedalus is a reef lost in the middle of the Red Sea, almost halfway between Egypt and Saudi Arabia. Its superb lighthouse on the reef, which is reached through the small pontoon equipped with rails that were formerly used to transport goods, is emblematic. From above, the view is breathtaking on the 360 ° reef and can appreciate its size. But the real show is under the surface. Because it is a great site for hammerhead sharks, longimanus, manta rays and beautiful schools of tunas. A coral reef in the middle of nothing concentrates life ! 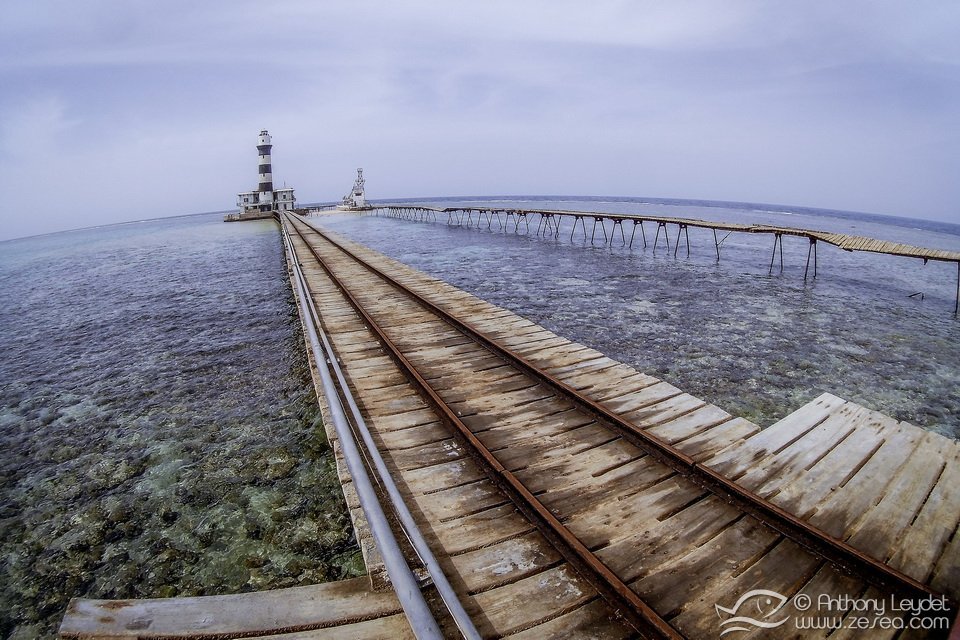 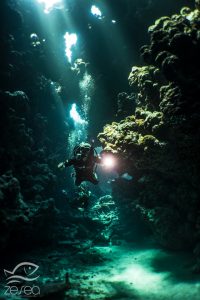 Fury Shoals are a set of reefs located in southern Egypt, north of Berenice Point. They are notably famous for the Satayeh reef sheltering a large colony of long-billed dolphins. Their almost safe encounter is a real moment of joy for anyone who has the pleasure of swimming snorkeling with them in complete freedom.

One of the great peculiarities of Fury Shoals is the possibility of being able to dive right in the heart of the reef. This is for example the case on the splendid site of Shaab Claudia (or Shaab Claudio according to the books). This reef presents galleries that can be explored safely, despite some passages sometimes a little narrow. You will be able, if you dive there at the time when the sun is at the highest, to enjoy spectacular lighting effects. The galleries pierced in the upper part let the rays of the sun pass and offer a sublime spectacle. A real treat to “lose” safely in the many corridors roaming the reef.

Shaab Maksour is also a site to see in the Fury Shoals, with its plateau and pinnacles full of life !

In the minds of divers, St. John’s automatically rhymes with “Southern Cruise”! The reefs located to the south of the Berenice point, offer even warmer waters than the dive sites further north, and especially the pleasure of seeing the Red Sea in all its splendor ! Because here, the boats are few enough to come and the sites are more preserved than elsewhere.

St-Jonh’s Caves is one of the most beautiful sites, and like some Fury Shaols sites, offers a reef traversed by large galleries to explore the interior. Umm Arouk, it offers a beautiful coral garden where we move in the middle of many pinnacles, giving a rather mystical look to the site … Sites like Gotta Kebir or Gotta Soraya where you can explore the walls covered with beautiful gorgonians and a multitude hard and soft corals. 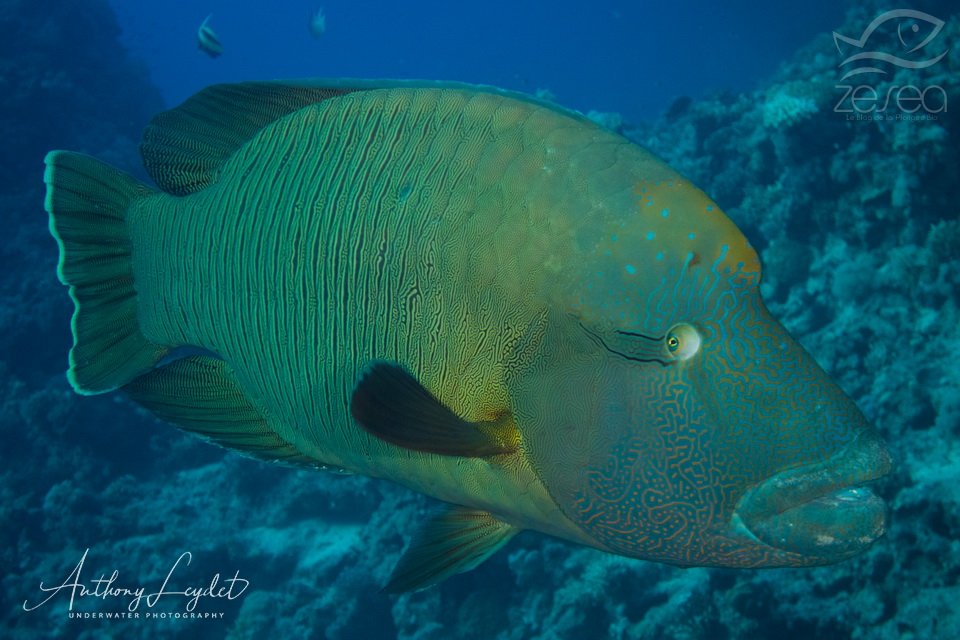 Here are two pearls of the Red Sea ! A place where you will meet almost nobody, to not say nobody. Located even further south than the St. John’s Reefs and further offshore, even fewer dive cruises come this far. And the pleasure is immense, because from the first shots of fins under the surface, we feel very quickly how the places are spared. The reefs are literally bubbling with life and the corals are healthy (like many other sites in the Egyptian Red Sea, do not make me say what I did not say, even though many sites have still suffered the passage en masse divers).

Rocky Island and Zabargad are two underwater paradises, where the currents can sometimes be quite violent. At Rocky Island, it is possible to see many hammerhead sharks advancing effortlessly in the blue, while a battalion of dog-toothed tunas will pass in front of your nose ! Huge black coral branches spread their polyps in a cloud of anthias … Anthias, there are everywhere, in abundance ! Zabargad, is the big island north of Rocky. Every summer, it hosts on its beach many sea turtles who come to lay. Fortunately the site is very difficult to access, well protected by the coral reef. The outer face of it has a gently sloping drop, on which the corals flourish for the pleasure of the divers …

Of course, we cannot limit the Egyptian Red Sea to this sites only, and there are many other exceptional dive sites, such as Dahab, Elphinstone or the wreck of the Rosalie Moller, to name a few. … I give you the sites that have marked me the most, and if I was asked to retain only 3 … I prefer to tell you right now that I will be unable !

And you, what dive sites in the Egyptian Red Sea have you noticed the most? Come on, I listen to you, leave your comments !

How to carefully clean your underwater photo housing ?