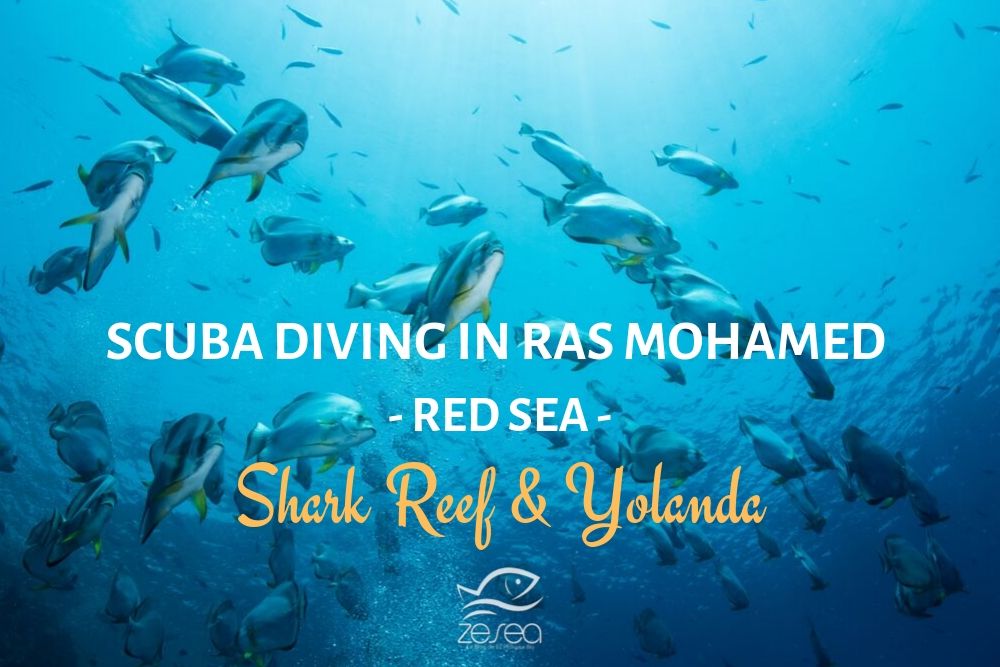 Ras Mohamed…. These two words alone are enough to delight any diver on the planet, the photographer exults, and the “bio” diver gloats ! Located in the extreme south of the Sinai Peninsula in Egypt, Ras Mohamed has been classified as a marine reserve since 1983. Its drop-off, which plunges to a depth of 700m, is one of the jewels of the Red Sea, just like its coral garden…

During my many cruises with Diving Attitude in the Red Sea, the Exocet makes a must visit the heart of the world famous marine reserve, for dives on the sites of Shark Reef and Yolanda, forming between them an immense diving site. Both can be explored during the same dive, but the site is so surprising that it is not uncommon to plan two dives.

The vertiginous drop-off of the Ras Mohamed National Park

The launching was usually done from the boat’s aft platform, but for safety reasons, it is now the zodiacs that drop us off near the drop off point. We slowly start to slide along the vertical and vertiginous wall… more than 750m high, at the foot of Shark Reef ! The current is always a little strong, sometimes in one direction and sometimes in the other, and that’s very good. Because it is when it is present that we have the best chance to observe superb schools of fish in the open water. Nasons float in the blue school, trevally patrol, sweetlips form compact schools, or batfish that are counted by dozens, and swim peacefully near the gorgonians that spread their branches in the currents. 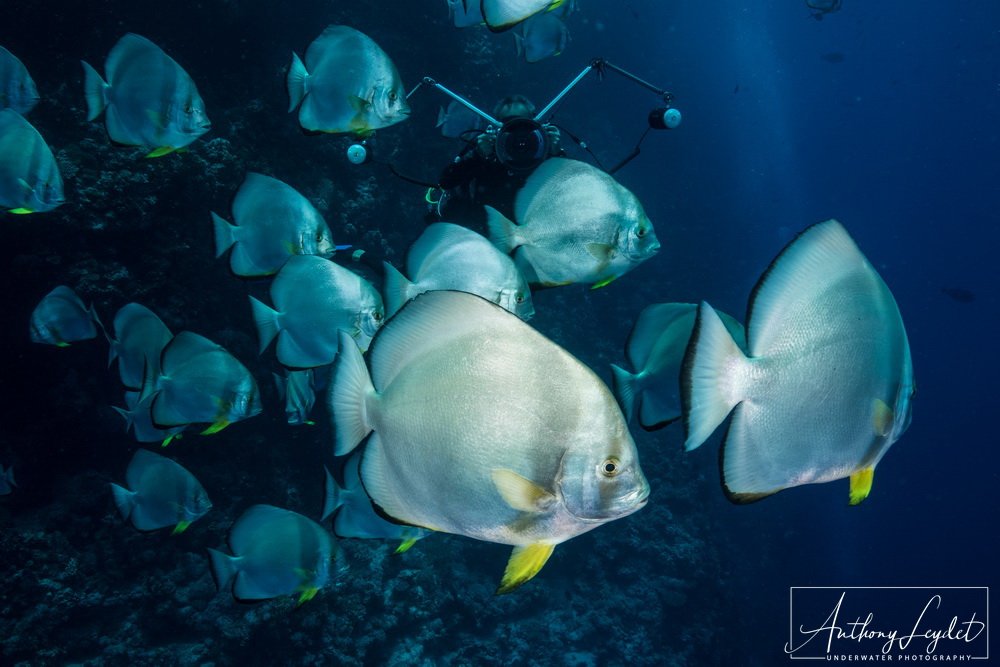 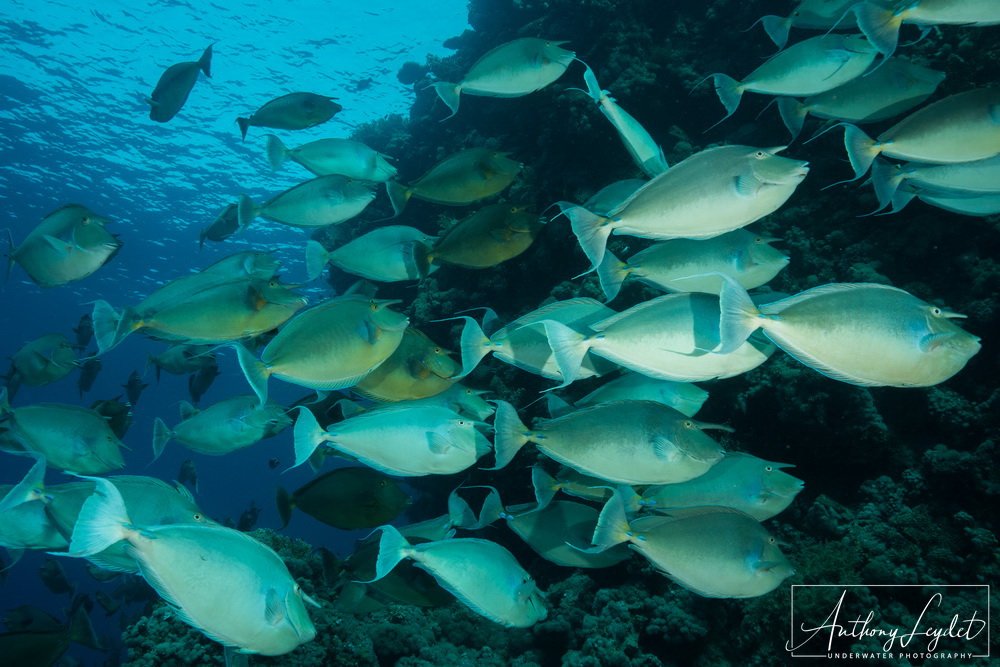 Shark Reef and Yolanda Reef are two huge coral pinnacles, which can be bypassed, and which protect a sublime coral garden on a sandy area whose depth is generally between 10 and 15m. 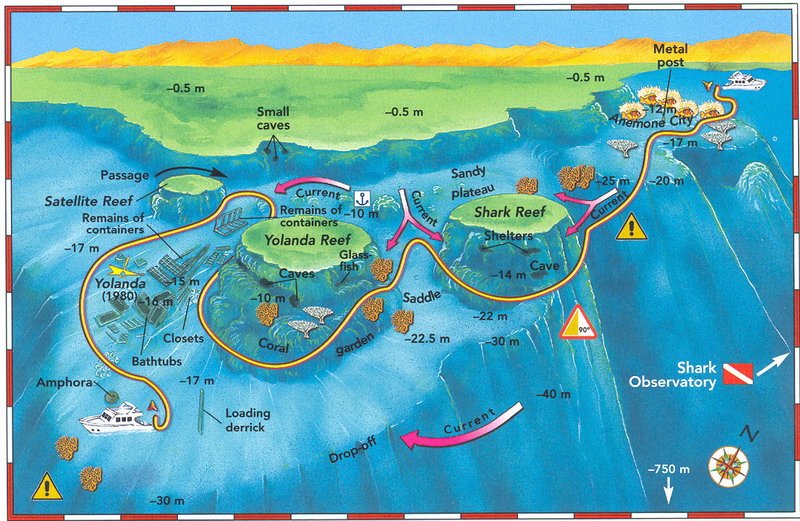 The western pinnacle takes its name from the ship that sank in 1980, the Yolanda, which carried sanitary facilities. The wreck dropped below 100m but much of the cargo remained stranded at a depth of about 20 metres. There are toilet bowls, baths and ceramic basins. It is not uncommon to see some divers having their picture taken while sitting on one of the toilets dedicated to souvenir photography ! 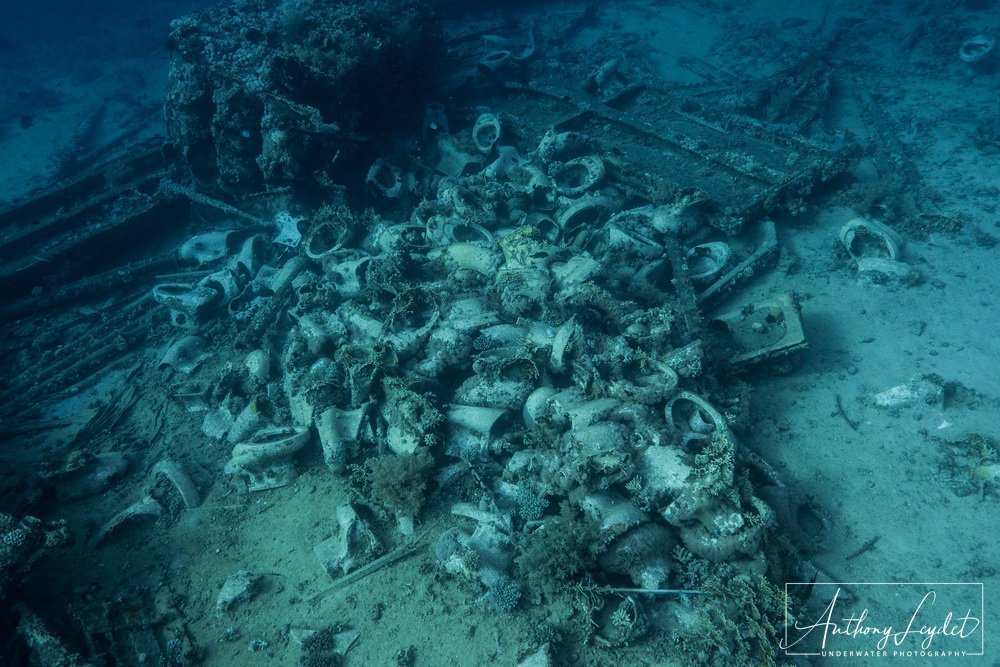 Once sheltered from the pinnacles, and coming up from the remains of the Yolanda, a wonderful coral garden opens to divers. On a sandy bottom are scattered a multitude of small coral reefs. And life is really incredible here in Ras Mohamed. We can observe a phenomenal quantity of fish species (Did you know that in the Red Sea, there are more than 1000 fish species ?). Giant morays are numerous, as are blue-spotted stingrays.

We can observe many tropical fish such as angelfish, butterflyfish, wrasses, or other surgeonfish… Several “cleaning stations” attract a variety of species. Whether it is a platax, a napoleon, a big triggerfish or a grouper, the work of the small cleaners is exciting to watch…

Whether you’ve never dived there or it’s not the first time, we always come back to Ras Mohamed with the same pleasure !

If you want to experience and dive in Ras Mohamed aboard the Exocet or Atlantis: 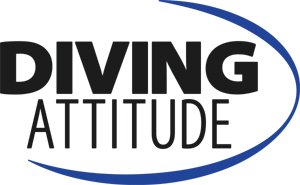 Diving in Aqaba, Jordan, the Red Sea in...